The Agave americana, or better known as the American century plant, is blooming at Bolsa Chica (early summer months).  They are quite impressive plants.  Like the Eucalyptus, the American century plants are technically not native to the region based on the Calflora database, but are historic relics of the past and are utilized by the native fauna (especially the American kestrels and hummingbirds).  We hypothesis the plants were planted as part of the Gun Club landscaping when the buildings were built. 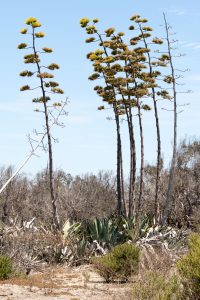 As I said, the Agave americana plants are impressive.  They are a type of perennial evergreen succulent with very sharp teeth on the edges of the leaves that can get up to 7ft tall and spread almost twice as wide.  The leaves are usually blue-green, sometimes with yellow stripes on the edge, and grow in a basal rosette pattern.  When it blooms the flower stalk can reach up to 30ft into the air!  The plant is part of the Agave genus, so it dies after it blooms.  The flowers are yellow and bunched on horizontal branches that nectavores love.  The plant propagates by seed or offshoots at the base.  The common name, American century plant, is misleading because the plant only lives up to 30 years, but usually blooms after 10 years.  Agave americana is native to Mexico and parts of South West USA, and therefore is drought tolerant and does well in good drainage soil in full sun. 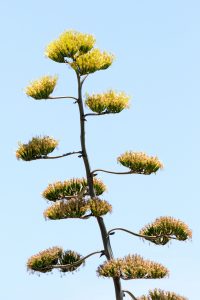 Native Americans in the South West used the Agave americana as an important food source and the Apache fermented and drank the ‘hearts’ and roots after being pit baked and crushed (just one way to get alcohol from Agave species…tequila* anyone?).  The Papago people also used the fibers as building materials/containers and in brushes for hair.

Ok, that’s enough about the botany, go out and enjoy the beautiful extraordinary American century plants while they still bloom!

*tequila is made from Agave tequilana, blue agave

The Proof is in the Flowers