You are here: Home / Animals / Bird of the Month- December is Northern Shoveler 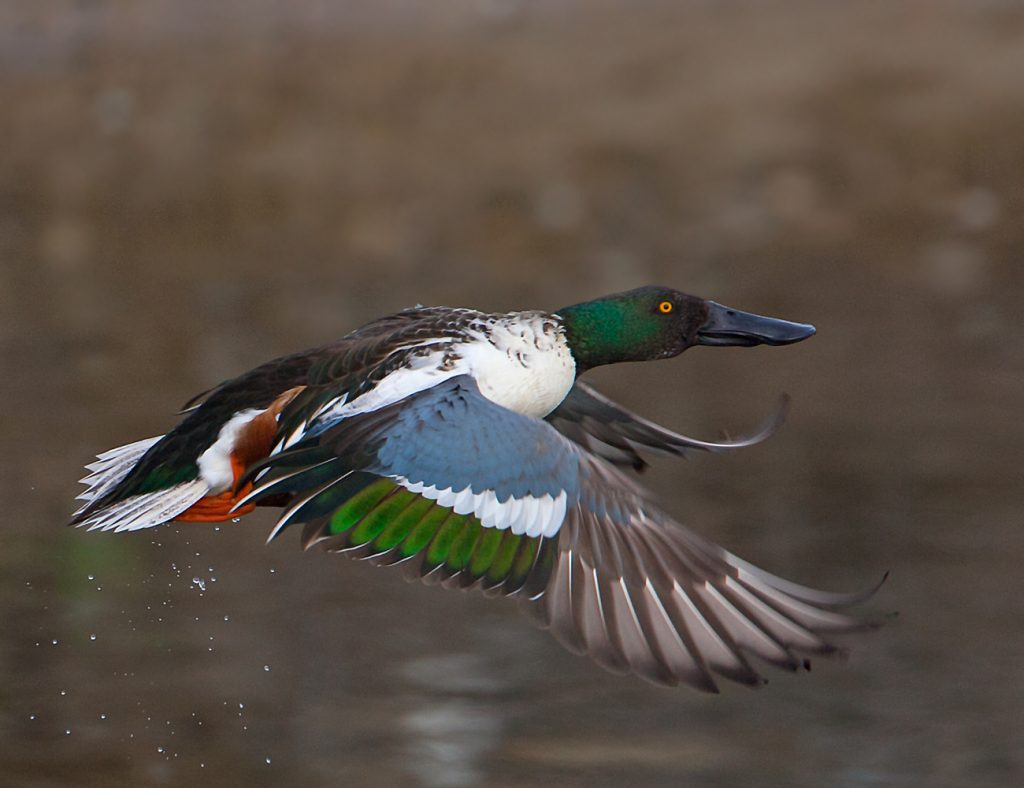 Why such the long face?  Because these birds are dabbling ducks and use their long bills to forge for yummy food in the mudflats. The males show colorful plumage when in flight with green, blue, white, and brown feathers that contrast with their yellow eyes and bright orange feet.  Very common in the winter time at Bolsa Chica, this bird species is one of the easier ducks to identify.

December’s bird of the month is the long-nosed Northern Shoveler (Spatula clypeata)!!!!

The Northern shoveler (19″ long; 30″ wing span; 1.3 lbs) is a winter migrant to Bolsa Chica on the Pacific Flyway.  The females, like a lot of duck species, are mostly brown, but with that rather large bill are comparably easier to identify.  Males are brilliantly colored with a metallic green head (like mallards), with striking yellow eyes, white chest, and rusty red sides.  Both sport bright orange feet and when in flight, you can see the green, blue, and white feathers very easily.  The bill is probably the most distinguishing characteristic for both males and females.

“The bill of the Northern Shoveler is big (about 2.5 inches long) and shaped like a shovel, but that odd-shaped bill also has about 110 fine projections (called lamellae) along the edges that act like a colander, filtering out tiny crustaceans, seeds, and aquatic invertebrates from the water,” states the website All About Birds by The Cornell Lab of Ornithology.

They can be found in the bays of Bolsa Chica by the thousands in the wintertime.  They form pairs during the winter, so you might see the males try to court females with head pumping, dips, and wing flapping.  If you travel abroad you might see them on your travels, because they also live in Europe, Africa, and India.