You are here: Home / Animals / Bird of the Month- July is the Black-crowned Night-Heron 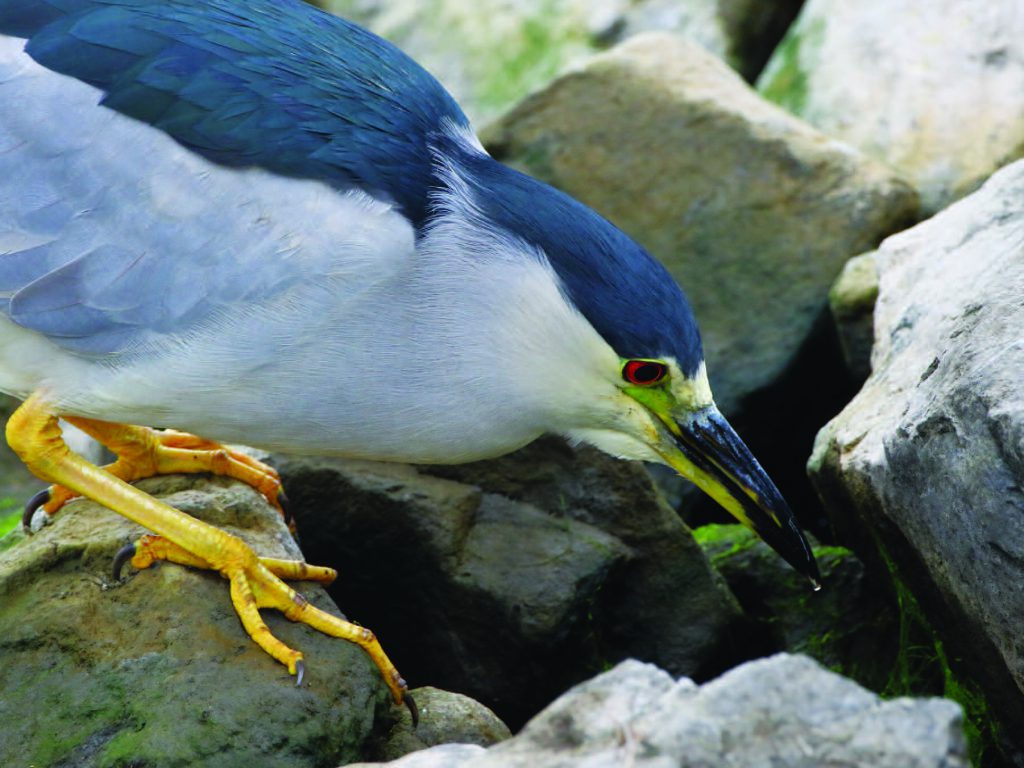 With striking large red eyes this bird would cause you quite the fright if you stumbled upon it in the middle of the night.  They mostly hunt at dusk and night and rest during the day near the edges of the water.  Found everywhere except Australia and Antarctica, these birds are the most widespread herons in the world.

July’s bird of the month is the patient Black-crowned Night-Heron (Nycticorax nycticorax)!!!!

Black-crowned night-herons (25″ long; 44″ wing span, 1.9 lbs) are stockier than their larger cousins, but are just as aggressive as hunters.  They prey on fish, eggs, and small chicks near twilight, so you might see a ghostly shadow glide down from a tree onto a rock at the edge of the water to strike at a fish swimming by.  Adults have gray and white feathers with a black crown and back contrasting with their bright red eyes and green-yellow bill.  Bright yellow legs and feet with powerful claws also help them as an effective hunter.  Juveniles are brown and white with yellower-orange eyes that change as they mature.  At Bolsa Chica, you will find them near the pocket wetland shrubs and along the edges of the bays all crouched and waiting for the sun to go down.  Very social by nature, this species will nest in mixed colonies with different herons and egrets, and will even raise other species’ offspring.  Don’t startle a baby black-crowned night-heron, though, or you will be wearing its lunch on your shirt!  YUCK!

Also, watch this lovely educational video made by Mark at AviBirds!  Lots of good info and some interesting behaviors to see.  Check out their Youtube channel and website for more fun videos and bird facts.