You are here: Home / Animals / Bolsa Chica Bugs and Their Relatives 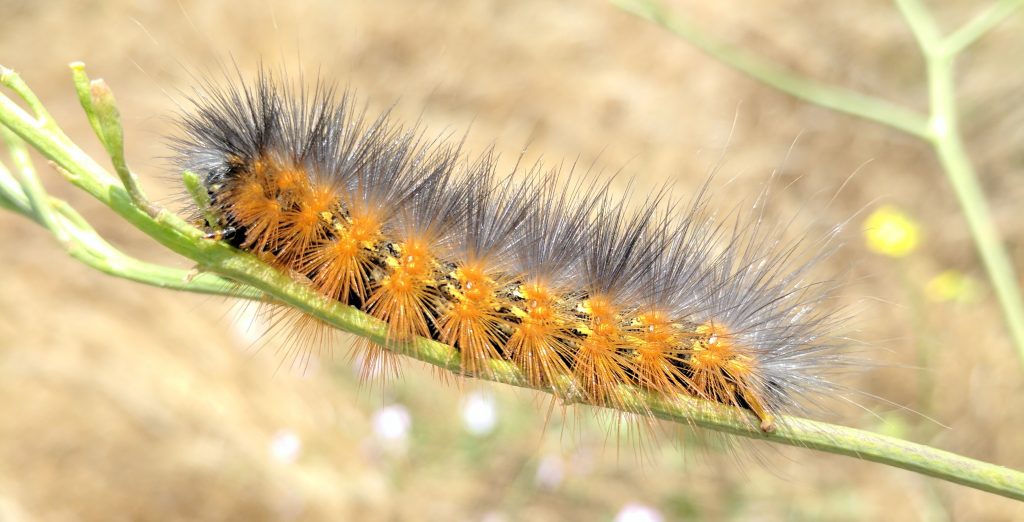 If you do habitat restoration that involves planting native plants, at some point you have to get down and dirty in the dirt.  Down here you get to meet plenty of bugs.  They are not what an entomologist would call “bugs,” that term is technically reserved for a specific group of insects in the order Hemiptera.  All arthropods, the animal group that includes the critters described here, have been around for a very long time, and evolved into MANY different forms.

Bolsa Chica (BC) is famous for its flying inhabitants – those flashy showoff birds!  But bugs can put on a pretty good airshow too, so let’s start with some fliers.

The most notable is the Wandering Skipper, a species of concern all along the SoCal coast because of the loss of its marsh grass habitat to development and sea level rise.  It’s big (for a skipper, anyway), brown, and hard to find because it is also wary!  Like all skippers, it was in taxonomic limbo for a long time because scientists couldn’t figure out if they were butterflies or moths.  Finally they decided that they are….Skippers!  Bolsa Chica also has the little Fiery Skipper, which is common in suburban gardens and is thought to have been brought to SoCal with imported sod from the Southeast US.  Like most skippers,

its caterpillars feed on grasses.  Fiery Skippers are often mistaken for honeybees, especially by people who are afraid of bees. Fiery Skippers are aggressive defenders of their flowerbeds and will often try to chase competitors like bees, butterflies, other skippers, and even hummingbirds away from the juice bar.  But they are armed only with their attitude, not stingers.

True butterflies also visit BC, including the especially a famous migrant – the Monarch, the cosmopolitan loopy flier – the Cabbage Butterfly, and several tiny but elegant natives -Common Hairstreak and Pygmy Blue).   We all know the Monarch and wish them well in their struggle to survive us and climate change. Bolsa Chica provides them with a vital rest stop on their journeys.

The white Cabbage Butterfly is found just about everywhere there has been European-style agriculture. Its caterpillars feed on members of the mustard and lettuce families, at Bolsa Chica mainly Black Mustard and Wild Radish.  Its erratic flight is hard to follow and confuses predators very successfully. It has follow us all over the world.

There’s nothing “common” about the littlest butterflies at Bolsa Chica – the Hairstreaks, Blues, and Coppers.  They are tiny but very intricately patterned little guys!  Their existence is usually tied to specific native plant species whose foliage feeds their caterpillars and whose flowers sustain the adults. Preserving those plants preserves these gem-like insects too.

We don’t see lots of moths at Bolsa Chica because most are nocturnal, but we do see the Salt Marsh Moth, a dull brownish daytime flutterer whose young are the commonly seen dark brown “Wooly Worm” caterpillars that we try not to step on!

One of the main native plants we nurture at Bolsa Chica is the endangered Southern Tar Plant, nearly extinct in this area.  One of the many reasons we want it to flourish in this habitat is its bug connection.  Honey Bees love it and use it happily, but we are mostly interested in its role in preserving native bees.

The honey bee, as most know, is an Old World import.  Many Native Americans used to date their modern history into two periods: “before the bees came” and “after the bees came.”  Bees to them were a symbol of the environmental and social changes brought on by European contact–some as sweet as honey, some as bitter as the “Trail of Tears.”

Native bees are as essential to the natural environment as honey bees are to our agriculture.  Many of them pollinate scarce and rare native plants and may be the only or the principal pollinator for these plants and essential to the survival of both species.  For a more complete description of these little sweeties, read Beverley’s blog post about these pollinators.

Now, let’s get down to earth!   Some “bugs” that link the open air to the subterranean are the spiders.  The most visible of them at BC is the Funnel Spider, whose webs are one-way traps for other bugs that lead to the spider’s underground dining room.  These funnel-webs are most apparent when they are covered with dewdrops on moist mornings–silvery and shimmering in the rising sun, reminding us that in a coastal “desert” like ours, even fog is life!

Funnel Spiders and their relatives the Grass Spiders are found all over the world.   Like all spiders, they “bite for a living.”  Small spiders can’t bite through human skin, so are harmless to humans.  But several larger spiders at BC, including the Funnel Spider and the Black and Brown Widow Spiders, can harm people.  All penetrative spider bites need some medical attention.  The Funnel Spider is less dangerous, but the Widow Spiders have dangerous venom.  Fortunately we have lots of Alligator Lizards at Bolsa Chica and their favorite food is Widows and their eggs!

Widows, like Alligator Lizards, live mainly under objects like logs and boards and in rodent holes– good reasons to keep your fingers out of such places.  The Brown Widow’s bite is less dangerous than the Black Widow’s, but still painful and needs medical attention.  Black Widow bites, as most Southern California residents know, require serious attention.  While the Brown Widow is a fairly recent arrival thought to be of African origin, the Black Widow has been here long enough to figure in Native American mythology and art, and supply them with arrow poison!  Read about some other spiders found at Bolsa Chica in this spider blog post.

Crickets and grasshoppers are usually depicted in folk and children’s tales as happy-go-lucky musical little idlers.  We do have some of those here at

Bolsa Chica, but a much more commonly encountered distant relative here is the Jerusalem Cricket, also known as the “Potato Bug,” or the “Niño de La Tierra.”  This is one ugly bug: shiny black-and-amber colored armor, a black face like an alien helmet with wire-cutter jaws and tiny black eyes, six strong feet with spiny saw-like spines on them.  We mostly meet this charmer when we are planting native plants and our digging tool intersects with one of his underground tunnels.

The Potato Bug is the subject of many myths.  The most common characterize him as aggressive and venomous.  Neither is true.  He WILL defend himself is you invade his home and try to pick him up, and those wire-cutter jaws that he chews tough roots with can give you a serious nip!  Potato Bugs are natives who help us out by feeding on some of the same non-native weeds that the Cabbage Butterfly caterpillars eat.

If you go to Bolsa Chica on a dry day, of which we have plenty, you will have met the next resident, the Stink Beetle or Stink Bug.  This beetle has other names – “Darkling Beetles,” and “Pinacate Beetle.” That name, used mainly by Spanish speakers, comes from its name in Nahua, the language of the Aztecs still spoken by many in Mexico and Central America – pinacatl.  The end of that word stands for a Nahua sound that Spanish and English do not have.  The Spanish changed it into a sound that they could pronounce!  It means, of course, Black Beetle.

You’ll meet Stink Beetles right on the trails, just goin’ about their business.  When they see your shadow or shoe, or feel your footsteps, they will often put their heads down and their butts in the air.  This is NOT an invitation to cuddle –   it is almost exactly the same as a skunk giving you the “talk to the butt” pose and it means exactly the same thing!  If you ignore this message and pick the little fellow up, he is likely to spray your hand with a foul smelling oily yellowish fluid. Wipe it off and don’t touch your eyes; it can damage them.

Stink Beetles are part of nature’s clean-up crew at BC and mainly eat decaying vegetation.  Harmless and funny, as long as the joke’s not ON you!

We have ants at Bolsa Chica, including natives and the diabolically well-organized Argentine Ant, which we guard against as best we can.  But I don’t do ants.

Since I don’t do ants, I’ll close with a real character, the Velvet Ant.  She is a

small fuzzy orange, red, or yellow, very fast moving little person that hunts along the trails and edges of the drip-zone under sage scrubs for her prey. She may be an aunt, but is no ant.  You will probably not meet her mate, since he spends his time flitting from flower to flower, not down on the dirt like her.

Papa Velvet Ant isn’t velvet.  He looks like a small wasp, because that is what he is, although he can’t sting. She’s a wasp too, but with no wings, which is probably why she was long thought to be an ant.  Unlike her partner, she packs a very long, potent stinger that is among the most painful of all North American wasp stings and among the most painful bug stings known. She only uses it to paralyze her prey and defend herself.  An old common name for them is “bull killer ant” or “matamulas” (Mule killers).

This has been a brief and frantic gallop through some of the smallest residents of Bolsa Chica, and there are many more. When I was recently in the Native Plant Growing Space Nursery we were briefly visited by a large green Centipede!  We don’t know if she is native or immigrant. But in spite of her well-earned reputation as a fierce predator, her unexpected presence seemed somehow life-affirming to me.  Her ancestors were here before and after the dinosaurs, and persisted in spite of all the mass extinctions that have gone on since then.  Like the dinosaurs’ own descendants, the birds we so love at Bolsa Chica, she is also still here.  Much of her habitat and many fellow bugs were destroyed or displaced by the 2020 fire on the Mesa.  But here she is, four inches of rippling mysterious green menace and promise, reminding me of the jade-green dragons depicted on Chinese porcelains – fierce, immortal – and somehow lucky!

So when you visit Bolsa Chica, look both up at the beautiful birds and down at the humble bugs of the earth, knowing that they both belong here, and both sustain one another and us, if we will accept their gifts of beauty and mystery.

disclaimer: scientific species names are as accurate as possible but are not 100% guaranteed