Old maps of the New World often show blank spaces marked “Tierras Desconocidas” or “Lands Unknown.”  Well, we have one of those lands right next door at Bolsa Chica.

When you look at the Bolsa Chica Ecological Reserve, you mostly see the flat plain between the bluff that holds the Brightwater housing development and the salt water of the Bolsa itself.  We call that area “the Mesa.”

And when you look at the Mesa, you usually see a mix of native plants and weeds (non-native invasive plants). These plants, especially the natives, are the basis of much of the life, especially the birds that people come from all over the planet to see.  Most people literally “overlook” the Mesa, a few look at it to see one of the interesting native plants on top of it—but almost nobody looks at the rest.

Because you CAN’T see it! 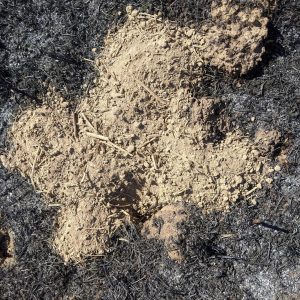 The recent fire gives us some rare glimpses: if you look at the baked, burnt, and almost plant-less burned areas of the Mesa, you will see the many exposed windows and doors of “Bolsa Chica Underground.”

Whose “doors and windows” are they?  Like all of nature, it’s complicated.  We know who made many of them—ground squirrels and pocket gophers.   California Ground Squirrels are pretty obvious because they live partly above ground (so they can try to “cute” you out of any Cheetos you just happen to have!).  Botta’s Pocket gophers, on the other hand, aren’t so evident.  Seeing one at all in unburnt terrain takes some patience and/or luck.  They’re so much in demand by the rest of the population of Bolsa Chica, as you will see, that they go above ground seldom and warily.

What’s all this got to do with Love and Hate?  Good question.  Again, like nature, including human nature, it’s complicated.

Simple mission to say but complex to achieve.

One complication is that we create self-consuming artifacts by planting and nurturing native plants to feed wildlife.  We plant ‘em and they eat ‘em.  Frustrating, because raising plants from seeds to maturity is a labor of LOVE!  Watching them get gobbled can be troubling.

An example is what pocket gophers, the builders of all those normally unseen “hobbit holes” in the Mesa, sometimes do.  Sometimes as we have just planted a native plant and while we are planting another, the first one disappears into the earth below!  And not even ONE “thank you” from the little monster who sees our new baby as just another veggie in Bolsa’s Produce Department!

In THAT moment, we HATE that!

However, as habitat restoration volunteers, we know we need to look at a larger picture—and while we may be upset by this shoplifting, we know that many other species just LOVE pocket gophers.

The lovely raptors that people come from all over to see and photograph here are all carnivores.  And the “carne” many of them favor is small rodents, among them our busy little buddy the pocket gopher.  Hawks of all kinds (except ospreys), herons and egrets of all sizes, and most owls—all eat gophers.  Not to mention gopher snakes (ever wonder why they’re called that?) and all the other snakes out there.  And of course, wily old Mr. Coyote.

Fortunately, pocket gophers, like many rodents, are real champions in the LOVE department—they too “love pocket gophers!”  While gopher males and females inhabit separate Underground apartments, they get together often enough to produce litters of three to twelve pups up to four times a year (in its southern range).  In spite of their popularity with predators, they are not an endangered species.

The benefits of burrowing rodents don’t end with stocking the Bolsa Meat Department because LOTS of other interesting critters live in the Underground housing that they build.

There’s the cutest resident of all, the California Legless Lizard, an evolutionary wonder listed as a CA Species of Special Concern.  There’s his very distant cousin, the Southern Alligator Lizard (with a name like that and a diet that favors Black Widow Spiders and their eggs, is it any wonder that his love life is violent?).   There are toads and Slender Salamanders and creepy crawlies like Funnel Weaver Spiders.  Jerusalem Crickets, AKA Potato Bugs, AKA the terrifying “Niño de la Tierra” of many myths.   Bumblebees and other native bees nest in the Underground and buzz up to our world to provide pollination services that allow the plants to feed all of us aboveground, as well as the pollinators themselves.

Besides providing temporary and permanent shelter for their various residents, the miles of rodent tunnels and their doors provide a way for moisture from rain and dew to reach the roots of the Mesa’s plants.  So the burrowing rodents are the Mesa Underground’s Road Department, Housing Department, and Water Department all in one!

We actually don’t know all the beings that live in the Mesa Underground.  It is, after all “Tierra Desconocida”!  But the next time you go to Bolsa Chica, take a second to consider that you are walking on as strange and as wondrous a land as the surface you see around you!