You are here: Home / plants / What’s that flower?

Last week on social media, we introduced people to some of the wildflowers of Bolsa Chica.  The Bolsa Chica Land Trust has planted or seeded most of them for our habitat restoration program.  I thought it might be nice to have all the flowers we have talked about recently in one place so people can read about all them.  So here’s the list:

These are goldfields (Lasthenia californica) that we seeded last fall. They do not get very big, but they do make nice fields of yellow flowers.  We have patches of goldfields all along the Mesa trail.  It blooms from February to June. 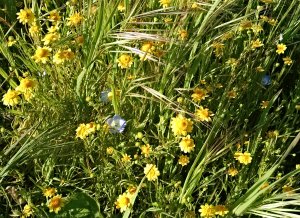 These are baby blue eyes (Nemophila menziesii) and it grows with the goldfields. It is a common annual found throughout California and is very short and delicate.  It blooms from March to June.

This flower only grows during really good years and is called miniature lupine (Lupinus bicolor). We have a few growing out on the Mesa this year and it is always a happy sight. Like other lupine species, it is easily identified as lupine by the leaves in a whorl and their beautiful flowers.  It blooms from March to June.

Blue-eyed grass (Sisyrinchium bellum) is not actually a grass but is a relative of the Iris. It is a perennial that goes dormant during the hot months of summer. We have planted Blue-eyed grass in our grassland restoration areas and it can be seen near the first bench closest to Warner Ave.  It blooms from March to May. 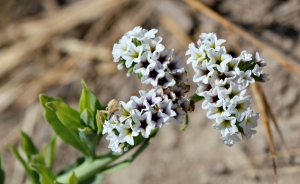 A later bloomer: Heliotrope (Heliotropium curassavicum). This flower blooms in May and June and is a low-growing perennial. If you look closely you can see the flowers have yellow or purple centers, and there is a small spider munching on a fly.  It blooms May to June. 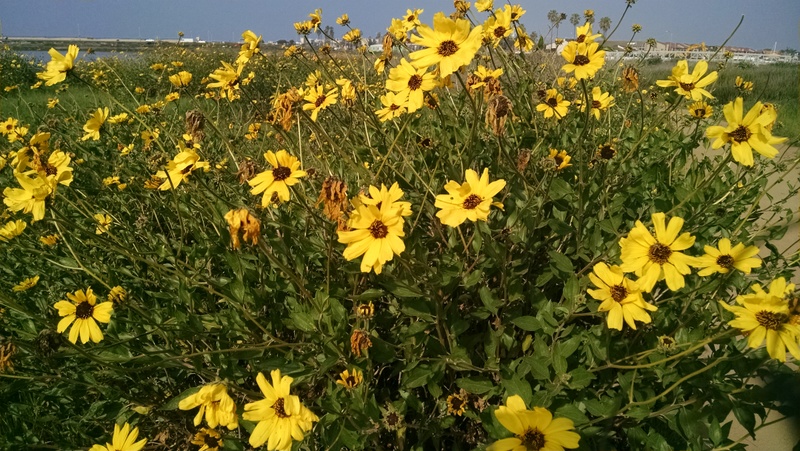 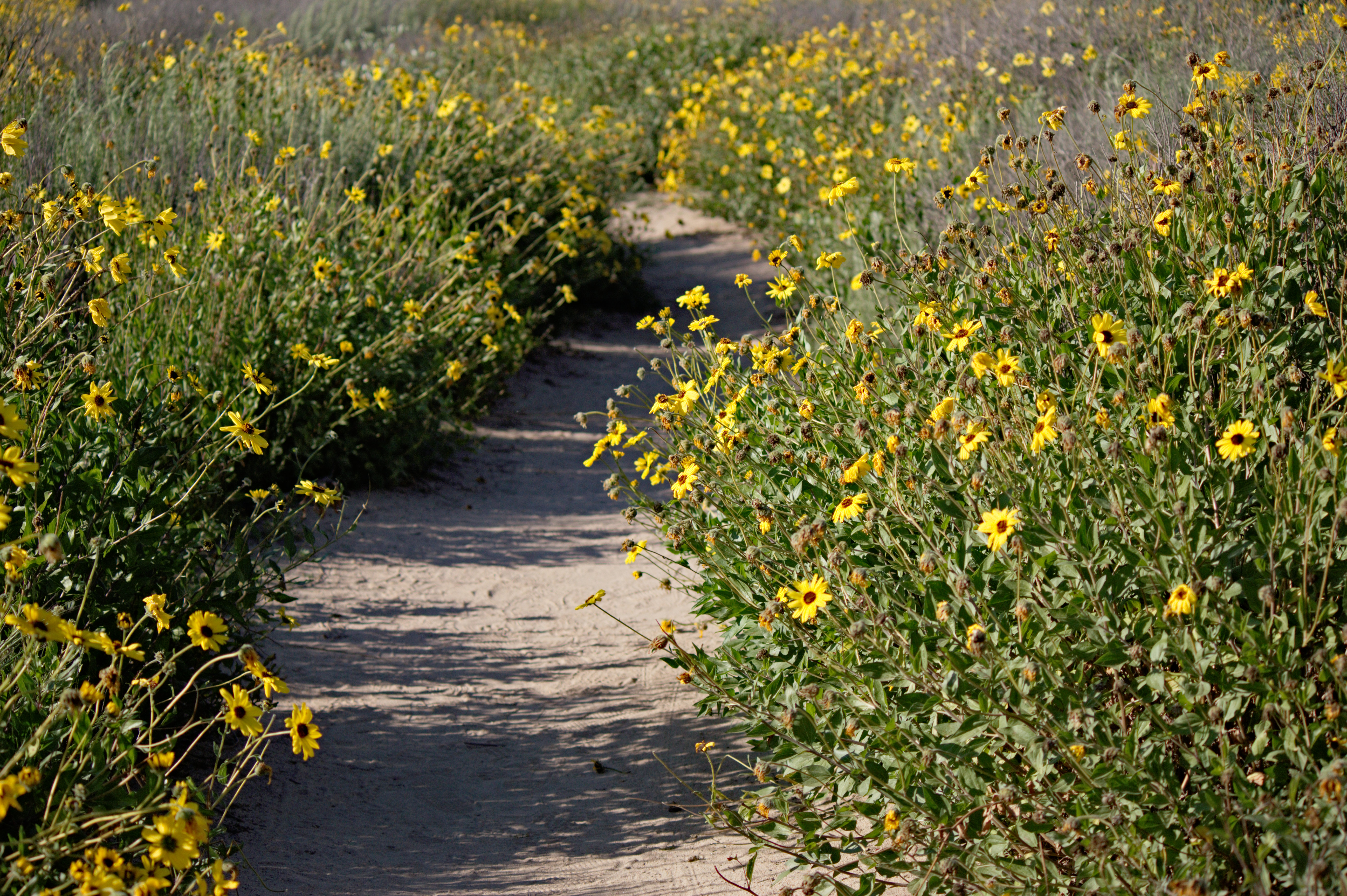 Our California‬ Bush Sunflower (Encelia californica) is blooming all over the Mesa! This plant is now very common at Bolsa Chica because of the diligence of the Stewards’ habitat restoration efforts.  Lots of native bees can be seen pollinating the flowers.  It blooms from February to June. 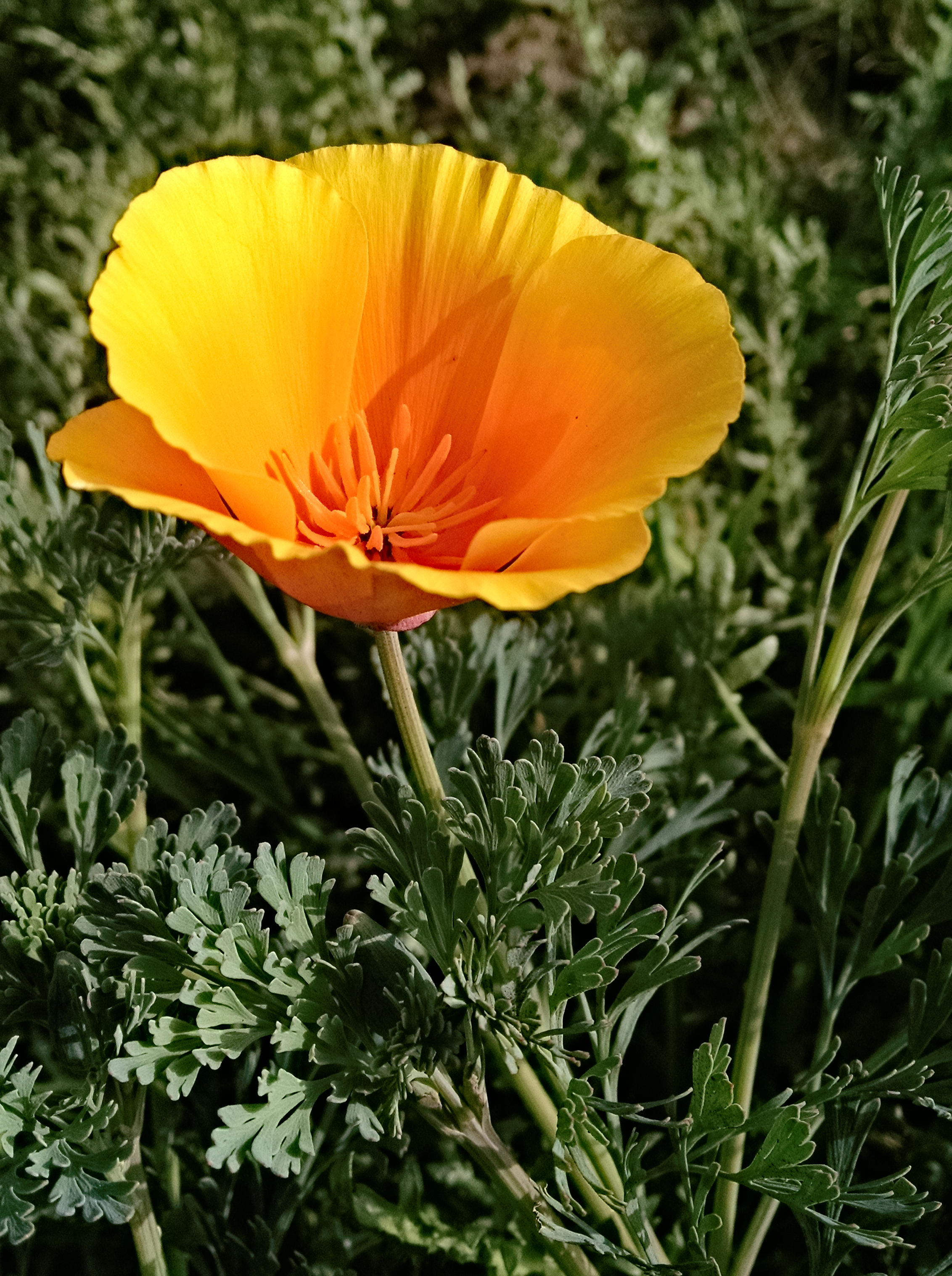 This California poppy (Eschscholzia californica) is the California State Flower.  It has bright orange to yellow petals and distinct gray-green leaves.  We have seeded this plant along the Mesa trail and there is a rather large patch near the first bench closest to Warner Ave.  It blooms from April to July.